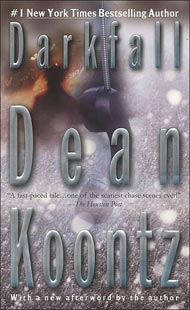 Holy men tell us life is a mystery. They embrace that concept happily. But some mysteries bite and bark. And come to get you in the dark.

Holy men tell us life is a mystery.
They embrace that concept happily.
But some mysteries bite and bark
And come to get you in the dark.

Winter gripped the city. Terror gripped it, too. They found four corpses in four days, each more hideous than the last. At first the cops thought they were dealing with a psychopath. But soon they heard eerie sounds in the ventilation system — and saw unearthly silver eyes in the snow-slashed night. In a city paralyzed by a blizzard, something watches, something stalks…

This couldn”t be happening. But it was. He hadn’t just stepped into the Twilight Zone; he had taken a giant leap into hell. His scream was muffled by the unnameable thing that clung to his head, and he couldn”t get his breath. He grabbed hold of the beast. It was cold and greasy, like some denizen of the sea that had risen up from watery depths. He pried it off his face and held it at arms length. It screeched and hissed and chattered wordlessly, wriggled and twisted, writhed and jerked, bit his hand, but he held onto it, afraid to let go, afraid that it would fly straight back at him and go for his throat or for his eye this time. What was it? Where did it come from? Part of him wanted to see it, had to see it, needed to know what in God”s name it was. But another part of him, sensing the extreme monstrousness of it, was grateful for darkness.