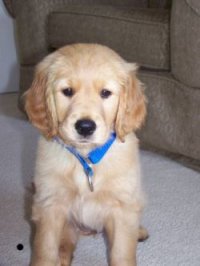 Ten months after losing Trixie, Dean and Gerda were ready to bring a new dog into their lives. At that time, in May of this year, the Canine Companions for Independence division in Oceanside had a young golden retriever, sent to them from the Northwest division, that they had decided to release from their program.

This sweet girl had gone through 22 of her 24 months of training and was superb in every way except that she was distracted by every cat, bird and bunny that she saw. Not to mention lizards, bugs and butterflies. She would not chase them, but she was hyper-alert to them, and assistance dogs cannot be distracted from the disabled person whom they are serving.

Arianna, as she was then called, was brought to Koontzland and at once captured everyone’s heart. She is fully grown—and turned two on 18 June—but is small for a golden, with an ideal weight of 51 pounds. Her butt is so small that when she sits up on her hindquarters, she leans back and appears to be perched on nothing, with just her tail preventing her from falling over. Occasionally, she does fall over. 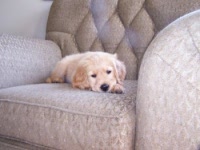 Although she has the lean, classic profile of a breed more known for speed than goldens are, her face so resembles Trixie’s face that everyone in Koontzland was stunned on first meeting her. One of the charms of goldens is that they do not all look alike, but have many faces with considerable differences one from another. Dean and Gerda wondered if this perceived likeness was in fact as strong as they thought or if sentimentality led them to see Trixie in Anna. But Trixie’s vets (now Anna’s) both remarked on the incredible resemblance on first meeting her. 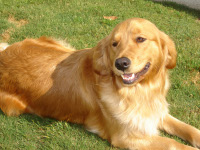 And here’s the kicker: when the folks at CCI Oceanside got the full background papers on Anna, they discovered that one of Trixie’s brothers was Anna’s grandfather. Dean and Gerda’s beloved Trixie was Anna’s Great Aunt! Which explains the striking resemblance. Considering the number or breeders and dogs passing through the CCI program in its various divisions over all these years, the chances are very small that the Koontzes would receive a dog only two degrees of separation from the litter of which Trixie was a part. Obviously, Trixie sent Anna to them! With instructions to keep them in line. A big job. 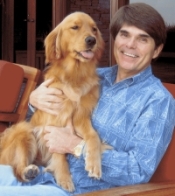