Skip to the content
Home Essays PHANTOMS From the Author

PHANTOMS From the Author

Writing Phantoms was one of the ten biggest mistakes of my life, ranking directly above that incident with the angry porcupine and the clown, about which I intend to say nothing more. Phantoms has been published in thirty-one languages and has been in print continuously for fifteen years, as I write this. Worldwide, it has sold almost six million copies in all editions. It has been well reviewed, and more than a few critics have called it a modern classic of its genre. Readers write to me by the hundreds every year, even this long after first publication, to tell me how much they like Phantoms. I enjoyed writing the book, and when I had to reread it to create a screenplay for the film version, I found it to be just the thrill ride that I had originally hoped to produce. Yet it is this novel, more than any other that earned for me the label of “horror writer,” which I never wanted, never embraced, and have ever since sought to shed.

I enjoy reading horror novels, have considerable respect for the form, and admire the finest writers who have worked in the genre. I believe, however, that ninety-five percent of my work is anything but horror. I am a suspense writer. I am a novelist. I write love stories now and then, sometimes humorous fiction, sometimes tales of adventure, sometimes all those things between the covers of a single volume. But Phantoms fixed me with a spooky-guy label as surely as if it had been stitched to my forehead by a highly skilled and diligent member of the United Garment Workers Union making a far better wage than that poor bastard crocheting license-plate cozies.

So why did I write it?

In 1981, after Whispers had become a best-seller in paperback, I wanted to follow it with an equally strange novel of psychological suspense, an edgy and chilling tale in which the only monsters were the human kind. My publisher believed the book had succeeded because readers had thought–solely because of packaging–that Whispers was a horror novel. Horror was then a hot genre. Prior to Whispers, I had never earned a great deal of money from a book, and the Whispers royalties then due were slowly, slowly, slowly moving through a long pipeline. Meanwhile, I needed to pay the bills, and my agent and publisher made it clear that I could not get a substantial advance for another book like Whispers, only for a horror novel. I was also told that a horror novel would be backed with major advertising, but that a mere suspense novel would not get much support. If I wanted to build upon the success of Whispers, I had no choice but to write a highly promotable horror novel. Against my better judgment, I wrote Phantoms.

I thought I would cleverly evade their horror-or-starve ultimatum by making Phantoms something of a tour-de-force, rolling virtually all the monsters of the genre into one beast, and also by providing a credible scientific explanation for the creature’s existence. Instead of fearless vampire hunters armed with wooden stakes, instead of werewolf trackers packing revolvers loaded with silver bullets, my protagonists would save themselves by using logic and reason to determine the nature of their mysterious enemy and to find a way to defeat it. Phantoms would be a horror story, yes, but it would also be science fiction, an adventure tale, a wild mystery story, and an exploration of the nature and source of myth.

When I delivered the book, there was little enthusiasm for it. Only 5,000 hardcovers were printed, and prior to publication, I was told by most people in my professional life that this was too much of a horror story and, therefore, could be of no interest to the broader audience that had made Whispers a paperback best-seller. I was flummoxed. I felt I had delivered precisely what had been asked of me, only to be crushed like that Hell’s Angel crushed the guy who called him a “kissy-lipped girly man.” The reviews began to come in, and they were largely excellent, although this praise did not result in a bigger first printing or any promotion, which led to festivals

of self-pity and wild storms of depression in the Koontz household. Fortunately, enthusiasm for my work remained strong at the paperback house, and one year after the hardcover bombed, Phantoms followed Whispers onto the paperback best-seller list, ensuring that my career would not lose momentum. Thereafter, it sold and sold and sold; and as I write this, it is nearing its sixtieth printing in paperback in the U.S.

Do I like Phantoms? Yes. Do I wish I’d never written it? Yes. Am I happy to have written it? Yes. Am I a little schizo on this issue? Yes. Although as a matter of career planning, Phantoms was a major strategic blunder, the writing of it brought me considerable pleasure, and readers’ outspoken delight in the book has provided a gratification that has sustained me through some bad days.

The lesson, I suppose, is that beneficial developments can flow even from a mistake. If you work in a nuclear-power plant, however, triple check yourself before you push that button. 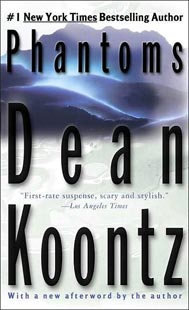